A sanctuary for arts, culture, and creativity in Seattle’s Ballard-Fremont neighborhood. Find us on Facebook and Instagram for the latest announcements.

Are you a new student looking for information on our aerial arts classes? Please visit our NEW STUDENTS page to get started.

Returning student ready to register for a class? Log in to our VAMP, our online registration system HERE.

Important information regarding COVID-19 reopening procedures and our upcoming mini session of classes can be found HERE and HERE.

Arcadia is the home of The Cabiri, a nonprofit organization that transports modern audiences into the myths and stories of lesser-known, ancient, and endangered cultures through the performing arts.

Want to attend a performance or workshop at Arcadia? Visit our EVENTS page to learn more.

Interested in taking a class? Visit our CLASSES page and CALENDAR page.

Looking to rent a space for our rehearsal or event? Visit our RENTALS page to learn more. Please contact us at arcadia@cabiri.org if you have questions. 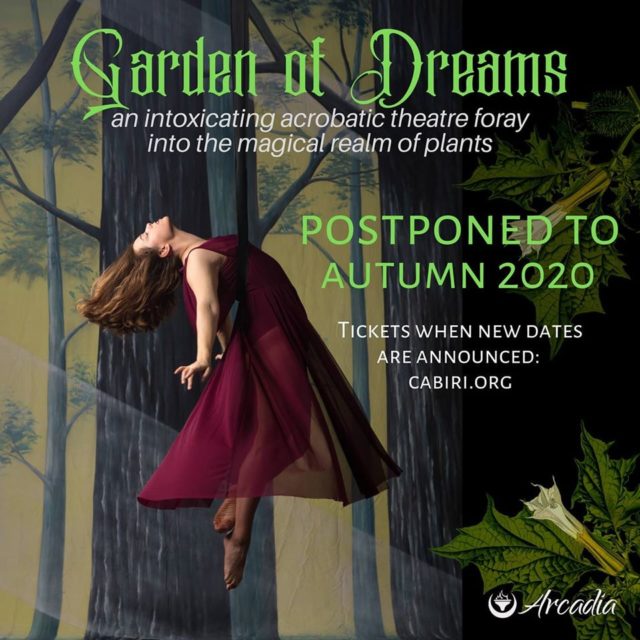 Due to the Governor’s extended stay home order, we have decided that postponing 🌿Garden of Dreams🌿 to a future date is the best choice for

END_OF_DOCUMENT_TOKEN_TO_BE_REPLACED 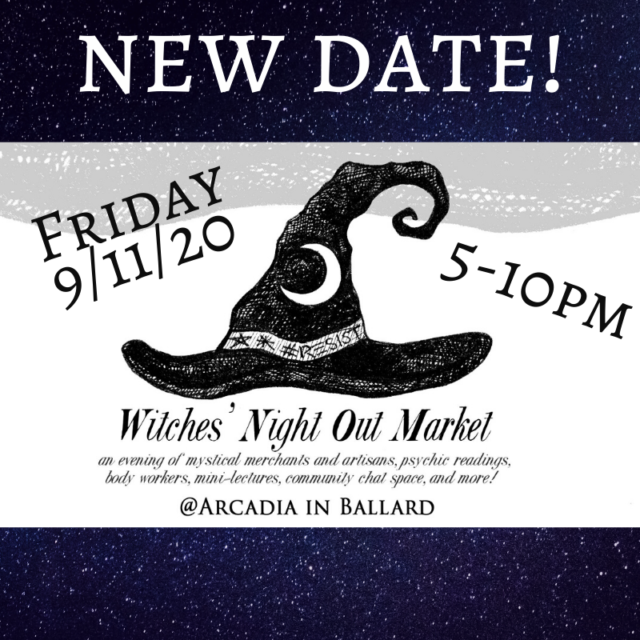 The next Seattle Witches’ Night Out Market will take place on Friday September 11th  from 5-10pm at Arcadia in Ballard. Geared towards

END_OF_DOCUMENT_TOKEN_TO_BE_REPLACED 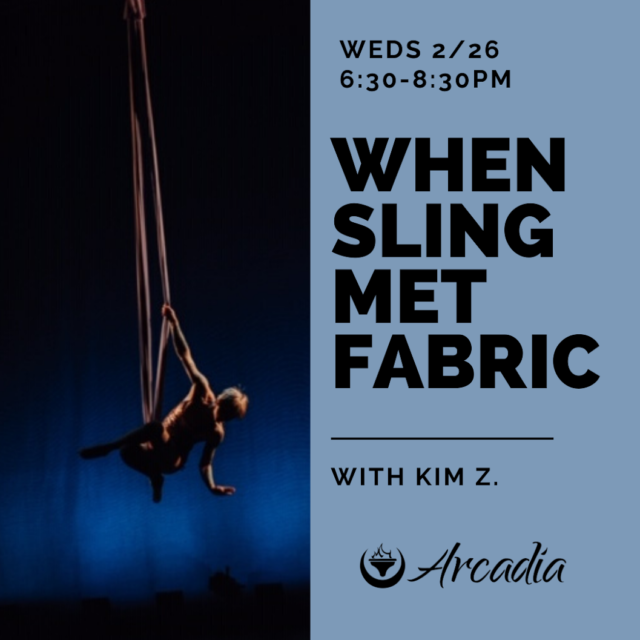 When Sling Met Fabric Weds 2/26/20 6:30-8:30pm This workshop will explore the relationship between single point sling and aerial silks. There is

END_OF_DOCUMENT_TOKEN_TO_BE_REPLACED 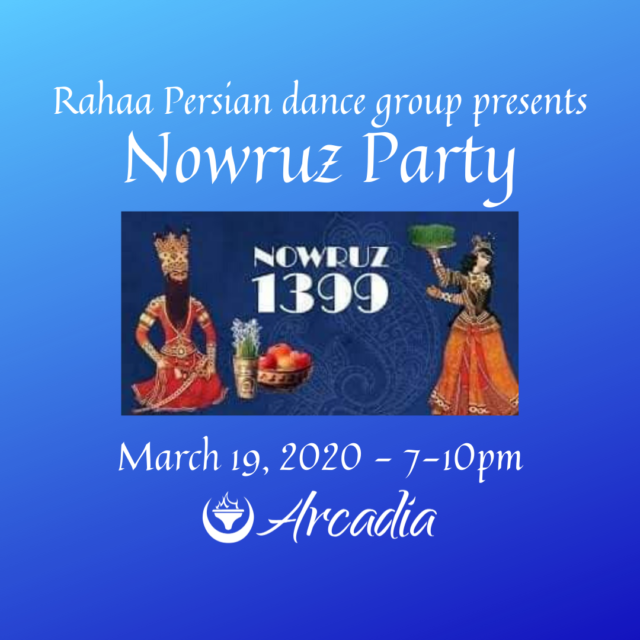 Our friends Rahaa Persian dance group are hosting a Nowruz (Persian New Year) party on Thursday 3/19/20 from 7-10pm at Arcadia. Join us for the

END_OF_DOCUMENT_TOKEN_TO_BE_REPLACED

Welcome and thank you for your interest in classes at Arcadia, Ballard’s newest cultural arts center located at

New to our studio? Start Here.

Click the names below to read the individual biographies
Charly McCreary, Studio Manager and Instructor 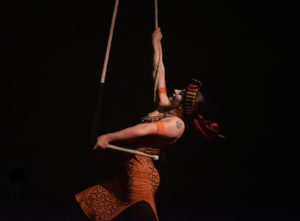 In 1999, Charly co-founded The Cabiri performance troupe, where she now serves as Managing Director. Charly is passionate about mythology, storytelling, and inspiring her students and fellow Cabiri troupe members to find their creative voices via the singular connection of heaven to earth offered by aerial dance. In her 20 years of dancing in the air, she has performed on just about every apparatus in the Cabiri’s repertoire including invented apparatuses such as the sun disc and aerial moon. IG: aquarialist 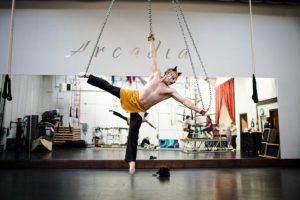 John founded The Cabiri in 1999 as an artistic mission to preserve folklore of past and current cultures. A lifelong student of dance and theatre, John has continued to work towards exploring the idea that myth must be performed to maintain societal enculturation and cohesion. The creation of Arcadia has been the constellation of a center for that resource. He looks forward to Arcadia being a performative home to many different people and cultures that grace Seattle while serving its primary function of furthering The Cabiri’s mission.

John has worked with virtually every large production company that has moved through Seattle and subsists as a rigging and pyrotechnics designer. His aerial roots come from developing cerceau and aerial chain with his primary coach Sam Alvarez and aerial tissu with Tanya Burka and Fred Deb (Compagnie Drapés – Aériens). His directorial foundation is with Marshall Garfield (Cirque du Soleil and Dragone) and at the 5th Avenue Theatre, where he has been a pyrotechnic effects designer.

John is a 4th generation Washingtonian from Skagit Valley. He currently shares residency between Seattle and Northern Iraq, where he lives in a Yezidi temple complex. He carries undergraduate degrees in Biochemistry/Molecular Biology with minors in Folklore and Mathematics and a Master’s Degree in Molecular Forest Ecology. He carries working certifications with ETCP, IRATA, SPRAT and NREMT in Rigging Rope Access and emergency medicine. 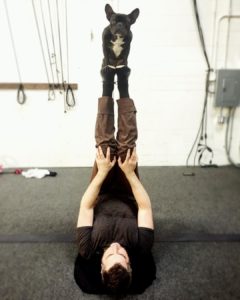 Graeme has been building and creating mixed media art and props since 2001. He began his education in the performing arts nearly two decades ago and has performed with Primary Element, Levity, Duo Rendez-vous and as a guest artist with Teatro Zinzanni and The Cabiri. Graeme’s circus disciplines include L-basing, standing acrobatics, and Castor-style Icarian foot juggling. When not kicking shiny objects or people around with his feet, Graeme enjoys helping keep Arcadia clean, organized, and safe for all who visit the studio. IG: footjuggler_quinn 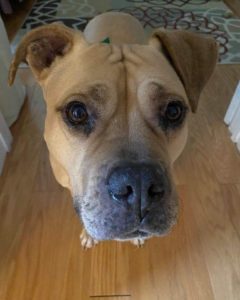 Freya is our friendly, gentle, sweet, and beloved Arcadia studio dog, believed to be about 5 years old. Freya belongs to Charly McCreary and Graeme Quinn and is at the studio almost every day. She will greet you with a tail wag when you arrive, and may snuggle with you during warm up and after class. She loves to give kisses and play tug-of-war and fetch with her stuffies. In 2016, her humans adopted her from Seattle Humane and in 2017, she received her Canine Good Citizen certificate from the American Kennel Club. Freya loves going on hikes with her humans and is positive-reinforcement trained. She would love to show you her “sit,” “lay down,” “shake,” “high five,” and “touch” cues if you have some treats handy. Allergic to or not a fan of dogs? Just let us know and we’ll make sure Freya gives you plenty of space. IG: freya_the_pittie

Click the names below to read the individual biographies
Peter Amelia, Instructor 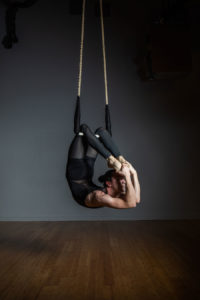 Peter (they/them) is a contortion, flexibility, trapeze, coach and performer based in Seattle. They have trained under Gunnar Field, Tsengelmaa Byambadorj, Lisbeth Mikoleit, and Vita Radionova among others. Peter has found a new appreciation for life and movement through circus and wants to share that same feeling with others. When not teaching or performing circus arts, Peter is an exotic animal trainer specializing in snakes and birds under their business name Taking Wing Consulting. IG: traptortion 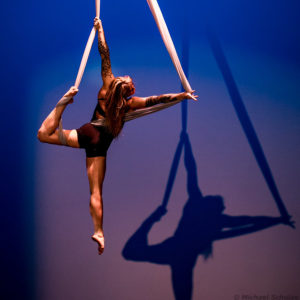 When not on the road Jenn resides in the magical wonderland that is the Pacific Northwest in her beautiful tiny off grid home with her two weenie dogs. Jenn has been immersed in aerial arts since 2008. She is driven by her focus on fabric (silks) and sling (hammock) and her first love trapeze [of all sorts]. She also enjoys exploring corde lisse, cloud swing, lyra, net, rope & harness and anything else someone puts in front of her. She has coached, choreographed and performed around the world including over 30 US states, China, Italy, Germany, Austria, Canada, Costa Rica and Mexico. IG: heelhang 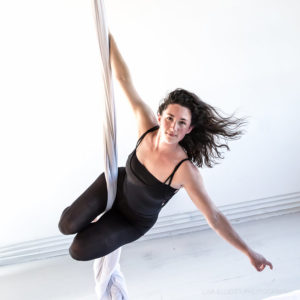 Emily has been studying aerial arts since 2015. She started her aerial journey finding solace at a small studio in Columbus, Ohio. After moving to Seattle in 2016 she started training at Apex Aerial Arts and she's been a dedicated student ever since. She performed as an apprentice in the Cabiri's 2018 Ghost Game show as well as their 20th Anniversary show and began teaching at Arcadia in 2019. The most important component to her teaching methodology is to ensure every student enjoys a safe and fun environment while learning strong beginner technique. 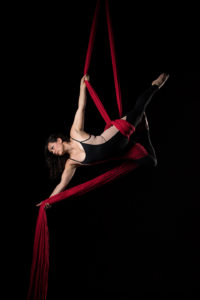 Jeani discovered aerial over five years ago, after falling in love with circus arts as an audience member. She grew up practicing various forms of dance and tumbling from ballet to tap to hip hop and was excited to take her hobby into the air! She began her aerial journey at Aerial Artique in San Francisco and has since studied at Circus Center, Versatile Arts, Arcadia and several other studios around the country. Jeani also practices Vinyasa yoga, running, pilates and ballet. When she's not in the air, Jeani is a registered dietitian with a Master's degree in Nutritional Sciences from University of Washington and an undergraduate degree from UC Berkeley in English Literature. 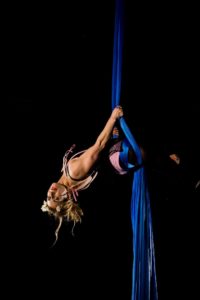 Jill Maio has been training, performing and teaching aerial acrobatics since 2003. A former coach at the Philadelphia School of Circus Arts, she taught frequently in the UK and Europe and founded AirCraft Aerial Arts in Boston, running the organization from 2009 – 2018. Her teaching combines technical skill with creativity and humor, allowing students to explore new reaches of ability in a safe and friendly environment. Favorite apparatuses include fabric/tissu, rope, sling and cloud swing, though she is happy to work with students on their apparatus of choice. Also an award-winning short fiction writer, Jill is currently at work on a novel. 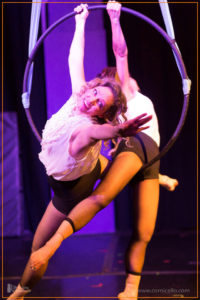 Nancy began aerial in 2004 as a 35 yr old couch potato. With exposure to tissu, trapèze, corde lisse, and hoop she found her home in the hoop. She loves teaching and sees it as a way to give back to the world by breaking away from those internal tapes and by empowering individuals to believe in themselves. 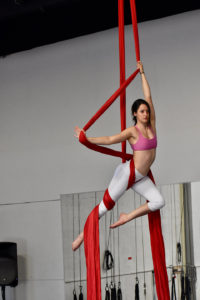 With a background in theatre arts and dance, Amanda fell in love with Aerial in 2011 as a way to inform her storytelling. She quickly realized this was exactly how her body was meant to move and became obsessed with training all the time, and learning as much as she could. She loved sharing her skills and ideas with anyone who'd listen. Now, Amanda focuses on duo aerial as her primary performance style, and she has a deep love for solo silks. Amanda believes that the circus is a place where anyone can find a home to learn about themselves, and she loves helping people unlock their hidden strengths. IG: amandaadaline 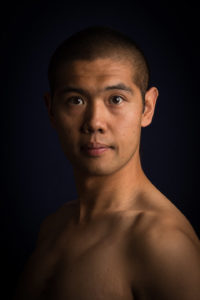 Warren is a photographer, yoga instructor, dance instructor, choreographer, and performer in the Seattle area. He found his passion for dance in social partner dance as an adult and gradually found his way to ballet, contemporary dance, and circus over the years. He graduated as a dance major at the University of Washington in 2017 and regularly teaches dance and movement to people of all ages and abilities. IG: warren_woo 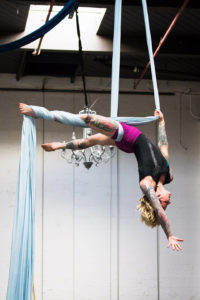 Kim Z has been teaching Aerial Skills and Pilates since 2014 and gained her teaching credentials at Versatile Arts and Vitality Pilates in Seattle. She is passionate about teaching technique based movement. She spends most of her time rolling up and down aerial Silks and Rope and has a deep love for acrobatic Sling Skills and aerial dance.

Interested in renting our studio for your workshop, rehearsal, photo or video shoot, or small event?

All of the spaces at Arcadia are available for community use when not occupied, with priority given to nonprofit use and/or groups whose work aligns with the Cabiri’s focus upon cultural preservation and heritage. Please note that rentals do not include use of our aerial dance grid or rigging points; use of our rigging systems will be granted on a case-by-case basis only.

See below for available spaces at Arcadia.  Please contact arcadia@cabiri.org if you have any questions. 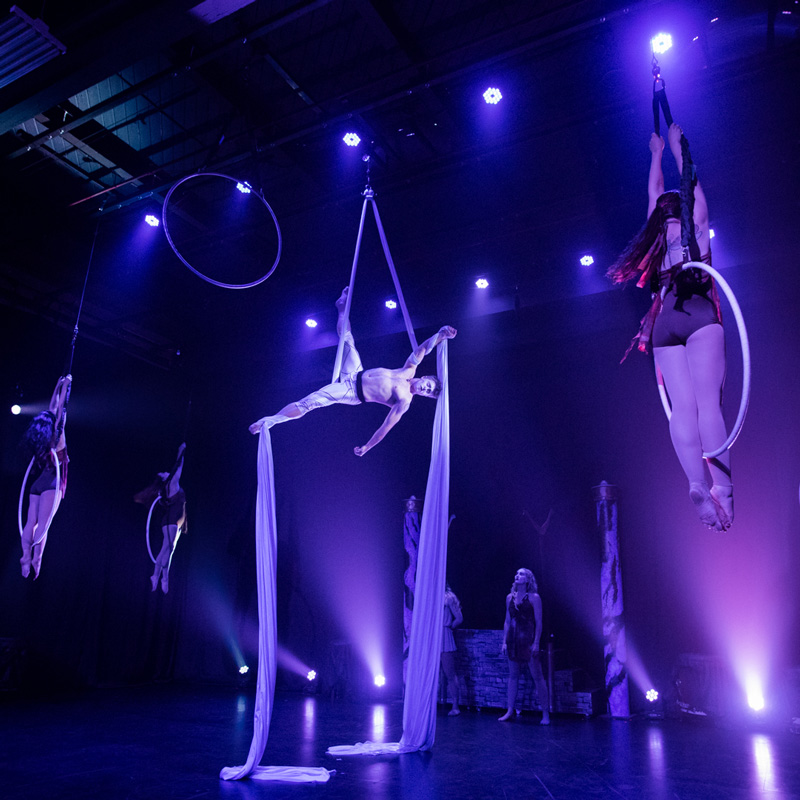 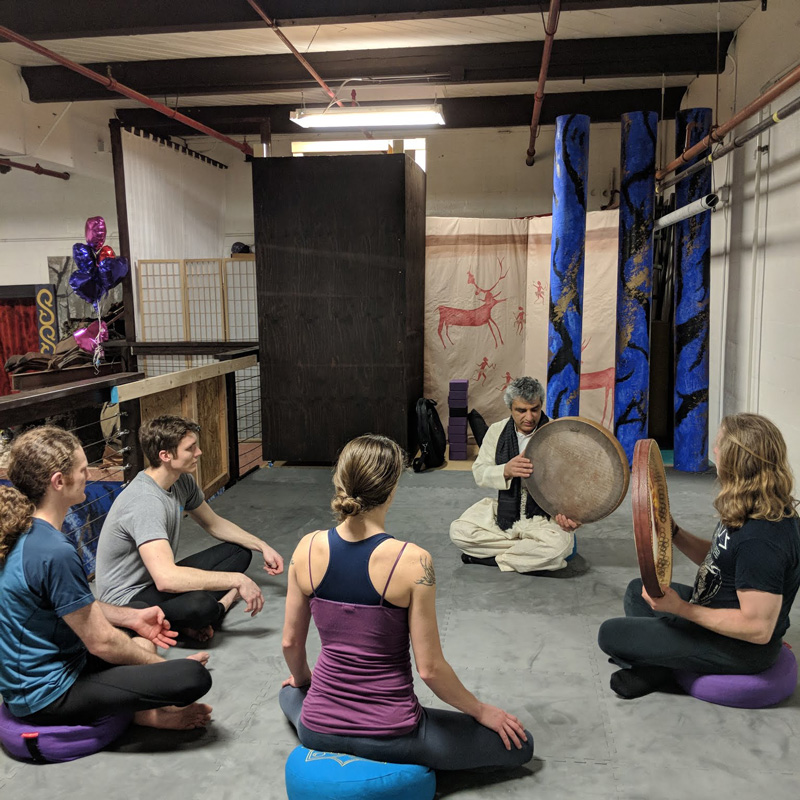 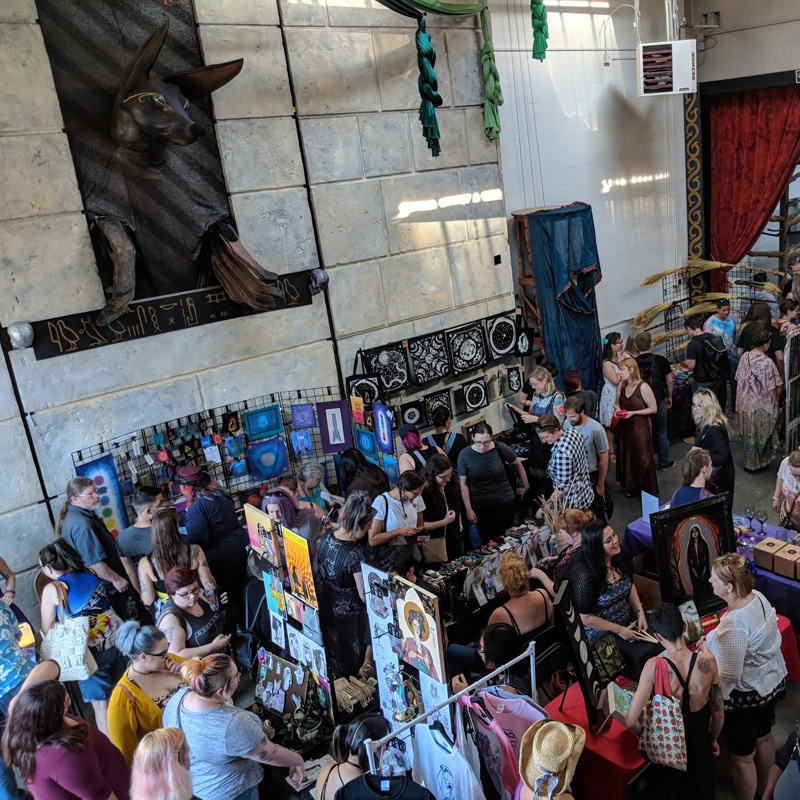 The Founder’s Studio is A 42’x41’ room with a 30’x40’ sprung dance floor, 8’ tall mirrors, and skylights that provide plenty of natural light during the day. Includes the use of our house sound system. Please contact arcadia@cabiri.org for rates.

The Loft Studio is a 12’x20’ elevated mezzanine that overlooks the North Studio, suitable for small workshops or flexibility classes and training. Overhead skylights provide natural light during the day. Be aware that sound from North Studio may carry into the Loft if there are other activities in process. Capacity – up to 16 persons. Please contact arcadia@cabiri.org for rates.

The North Studio is a 17’x20’ space with 1” thick foam flooring. Please contact arcadia@cabiri.org for rates.

How Can I Donate?

The Cabiri is a 501(c)3 charitable organization. The majority of our efforts are volunteer-based projects that serve to present affordable cultural education to the general public. Our shows make every effort to take the audience into the magical world of myth in a way the viewer has never experienced. As the arts are struggling financially more than ever before, we need all help that we can get. All donations are tax deductible and we present receipts for any donation. Thank you for your donation. It helps us more than you can imagine.